As with most other technologies, the aircraft underwent many improvements during World War I. Early war aircraft were not much different in design from the original Wright Flyer, which made its first flight over a decade earlier.

While early air spotters were unarmed, they soon began firing at each other with handheld weapons and even throwing spears. An arms race commenced, quickly leading to increasingly agile planes equipped with machine guns. A key innovation was the interrupter gear, a German invention that allowed a machine gun to be mounted behind the propeller so the pilot could fire directly ahead, along the plane's flight path (World War I Technology). 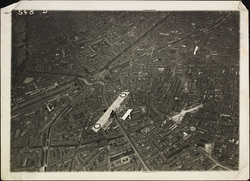 As the stalemate developed on the ground, with both sides unable to advance even a few miles without a major battle and thousands of casualties, planes became greatly valued for their role gathering intelligence on enemy positions and bombing the enemy's supplies behind the trench lines. Large planes with a pilot and an observer were used to reconnoiter enemy positions and bomb their supply bases. Because they were large and slow, these planes made easy targets for enemy fighter planes. As a result, both sides used fighter aircraft to both attack the enemy's observer planes and protect their own.
World War I itself encouraged the rapid improvement of the airplane. During the years of conflict, the overall stability and safety of flying improved tremendously, the  power, speed, and maneuverability of the newest designs. Moreover, the war fostered the general public’s respect for aviation and spawned a new generation of pilots and aircraft designers, who would go on to take human flight to the next level after the war (Sparknotes).