World War I was an international conflict primarily involving European nations that was fought from July 28 1914 and lasted until November 11 1918. The war started when Austria-Hungary declared war on Serbia. This conflict between theses two countries soon involved Germany, Russia, Great Britain, and France, largely because they were involved in treaties that obligated them to defend certain other nations.

How The United States Became Involved

Americans opposed sending U.S. troops into the conflict. U.S. President Woodrow Wilson heeded public opinion and declared the country's neutrality. Early in 1917 the German navy began attacking American cargo boats, trying to provoke the United States into entering the war. Almost 130 Americans died when a submarine sank the British ocean liner Lusitania in 1915. President Woodrow Wilson demanded an end to the attacks, and they stopped for a while, but by 1917 they had resumed. In early April 1917, the United States, angered by attacks upon its ships in the Atlantic, declared war.

World War I came to an end when the balance of power shifted in favor of the Allies (Serbia, France, Great Britain, Italy, Russia, the United States, and nineteen other nations) against the Central Powers (Austria-Hungary, Germany, Bulgaria, and the Ottoman Empire). The United States government mobilized quickly to rally troops and citizens behind the war effort. In April 1917 the U.S. Army numbered slightly more than 100,000 men. By the end of the war, however, the number had soared to about 5,000,000. The arrival of U.S. troops in Europe gave the Allies the manpower they needed to win the war. In November 1918 Germany agreed to an armistice, and the Central Powers finally surrendered. In January 1919, Allied representatives gathered in Paris, France, to draft the peace settlement. By the time the combat ended, almost 10,000,000 people were dead. 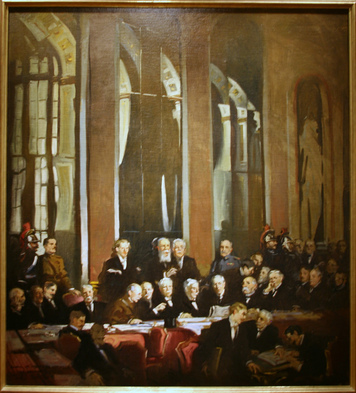 Signing of the Treaty of Versailles