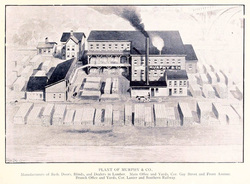 As a result of the USA joining the war in 1916, industry production in America boomed (Sandman. Manufacturers had to keep production up to the pace needed to support the war.  In order to produce more material in a short amount of time, new technologies were developed to help manufacturers meet the needs of the government and people (Sandman). More previously unemployed people held jobs, and the finances of the public, which had been poor since the recession of 1897, improved.
A few charts showing the effects on the economy and production in the United States. Click picture to open a larger version of the graph.