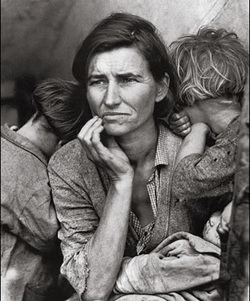 As the war ended, and soldiers started to return home, the industry production began to slow, and there was less need for workers in factories.  Farmers were struggling because of the abrupt end of wartime demand (Sandman). Many women stopped working, but even so there were not enough jobs for the men returning home.  This rising unemployment after a time of industry and at the same time, economic prosperity, planted the seeds of the coming Great Depression (Sandman) (World War I, 1920s Prosperity, the Great Depression).
The value of many stocks, which had become artificially inflated, fell dramatically in October 1929. Over the next three years, the business recession in America became part of a worldwide economic depression. Businesses and factories shut down, banks failed, farm income dropped (Sandman). By November 1932, 20 percent of Americans were unemployed.